How Social Media Can Save Your Ass

Let me start with a disclaimer. I am not a social media expert. Far from it. I was a skeptical, late bloomer when it came to using social media tools. The facts convinced me that I could no longer write it off as a “waste of time.” Here’s why.

If you want to understand internet marketing, Google is a good place to start. In December 2010, 11.7 billion queries (searches) were performed using Google search engine. That means that there were 11.7 billion opportunities for potential customers to find you on the internet.

Of course, there are also “the other” search engines, but the traffic from Bing, Yahoo, Ask and AOL is nominal compared to Google, which controls more than 66% of the search engine market.

Search engines are important but they are becoming less important. There is a lot of crap on the internet. When I say crap, I mean low-quality content, scrapers, spam websites, etc.

Low-quality is obviously a subjective term that’s hard to quantify with any sort of specificity. That’s exactly why it’s so hard for Google to filter out the crap. Just because I think something is crap doesn’t mean someone else doesn’t appreciate the content.

Google search results are produced from robots and algorithms, not actual people looking at the content to determine what’s good and what isn’t good. The 200 signals that Google robots measure can identify words but they can’t determine quality of content.

This “crap” problem exists, in part, because of Google. Google organizes and ranks websites based on various signals, which they do not fully disclose. You have a lot of people competing for the few top spots in search results, which creates an environment for abuse.

In all fairness, you can’t really blame Google. Their official policy states that you can not perform any activity to manipulate search engine rankings. In fact, they pose a question that you should ask yourself before creating content – “Would I do this if search engines didn’t exist?”

So, Google can’t filter the crap out of their search results as well as they would like, and SEO’s are taking advantage of the algorithm to make money online.

As a result, Google has targeted these low-quality websites, as well as content farms. Google wants to provide better search results but it’s a challenge. In Google’s quest to provide top quality, relevant search results, there will be some casualties. Collateral damage, you might say.

That means people that build legitimate websites that provide value and try to do things the right way, may suffer too. For one reason or another, they get caught in Google’s path and they lose their top rankings.

If you want proof just browse through the Google Webmaster Forums, where you’ll find classic headlines such as “Sudden and catastrophic drop off in traffic from google search for no apparent reason.”

You’ll find numerous stories in the Google Webmaster Forum of people that lost their rankings after the most recent Google update (Jan 2011). Google wants to improve their results and they’re looking at affiliate sites, content farms, article marketing, syndicated content, scrapers, and more. It goes back to the question – “Would I do this if search engines didn’t exist?”

Well, there will be blood. Ryan Abood can testify to that.

Ryan built a website that sold gourmet gift baskets. He busted his ass, working 100 hours per week trying to make his website profitable.

After a year and a half of hundred hour work weeks, he was making good money. Scratch that – he was making GREAT money, to the tune of $8 million dollars per year. He was ranking 1 or 2 for most of the keyword phrases relevant to his business. Life was amazing! Until November 11, 2008.

Ryan woke up that day and saw that his website was not ranking in the top position where it normally was. In fact, it was nowhere to be found in the Google search results. The holidays were approaching, which accounted for 40% – 60% of the revenue generated by his company.

Starting to panic, he contacted the SEO companies responsible for his link-building. Ryan did the SEO work himself in the past, but as the company grew, he hired SEO firms.

One of the SEO firms admitted that they purchased links. That is a big-time violation in Google’s book. The result – Ryan’s company was penalized and removed from the index.

Of course, Ryan contacted Google and told them exactly what happened. It didn’t matter. The damage was done.

Over that holiday season and the next year, Abood’s company lost about $4 million dollars in revenue as a result of the decrease in search engine traffic. It would’ve been even more, but he spent a ton of money buying Ads from Google. How’s that for irony?

Today, his business is back at the top of the search results and his business has grown even bigger than it was before. He credits social media for the massive growth. And, thanks to his social media presence, he’s not dependent on Google for 80% of his income.

The lesson is – it pays to diversify your traffic sources. Free traffic from search engines is great but do you really want to put all of your eggs in one basket? Even when you play by the rules (or so you think) something can go wrong. Websites can be removed from Google’s index if they are hacked, if the servers are down too long, and plenty of other reasons. Again, if you don’t believe me, check out the forums.

If you aren’t currently involved in social media, you should be. Pick your poison and jump right in. You may not see any results right away, but the more you learn, the more you interact, the more options you will have in the future. Social media just might save your ass someday.

More Superbad IM articles for you: 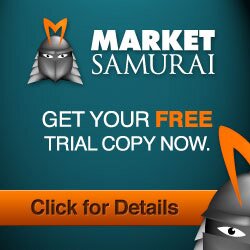